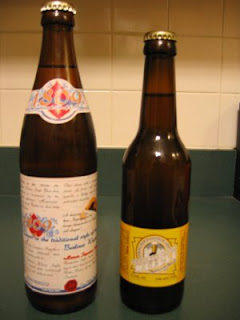 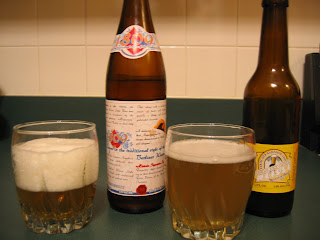 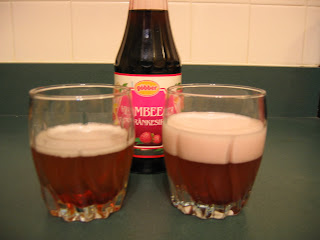 It's been a while since I've posted anything regarding my brewing, so I thought I would stick out there what my activities I have to accomplish this weekend.

I have the old Dirty Cow to bottle. It's been sitting in the cold basement in it's secondary for a while now. It's ready.

The Belgian Blonde has to go into a keg in preparation for the Brewer's Heritage Festival, so that means a little cleaning and sanitizing action.

I'm entering the First Crack IPA into another competition. It took second in Light Ales at the St. Louis Microfest. It also received Honorable Mention at the Bluegrass Cup.

On Sunday, I'm going to both a baby's Christening who's father happens to be another homebrewer. It's mostly a reason to drink homebrew and his keg of O'Fallon 5 Day IPA. After that, it's off the STL Brew's Picnic for more homebrew and nice food.

I'm going to try another bottle of the Little Pig Wheat tonight. Hopefully it will have fully carbonated and developed some kind of head. The last one at 5 days in the bottle was fizzy, but had no head to speak of.

National Homebrew Day was May 2nd, but we celebrated in St. Louis this last Saturday instead because of the Microfest the weekend before. Worm's Way provided the grain, honey and spices as a promotion of the hobby. Here's the recipe.

The only changes I made to this were the hops. I used Styrian Goldings instead of EKGs at 60 minutes (not 90 minutes) and used Styrians again at 0 minutes. I traded off the Hallertauer I had to Trish for some nice Centennial.

My OG was 1.056, so right on. I used a donated amount of proprietary Belgian yeast from Mattingly Brewing Co. www.mattinglybrewing.com , but it didn't seem to be taking off too fast. I pitched some of the yeast from the Church Mouse Blonde and it seems to be doing fine.

I need a name for this. Saisons are traditionally farmhouse ales. Maybe I'll just call it Saison du Mock.
Posted by Mockwerks at 9:54 AM 0 comments

I brewed the Belgian Blonde recipe on Sunday after painting the nursery. It was a long day.

I started the process at 3:00 PM on the nose. Everything went very smooth all the way through. With the assistance of my beautiful bride, I was able to use my new drill with the grain mill. Speaking of, I set the rollers with a feeler gauge to .030 inches.

I finished at everything including cleaning at 8:00 PM. The original gravity was 1.055. To continue the beer fun, I bottled the German Weizen (Little Pig) then which took me until 9:30.

I forgot the sugar!

Long story short, I was boiling down 1 lb. of sugar until 11:45. It's bubbling away now and looks to be very happy with the sugar addition.
Posted by Mockwerks at 10:26 AM 0 comments